From sea to shining sea, our top picks for the most amazing American small towns to see this year.

When it comes to places to take a vacation, it’s easy to think of America’s big cities: Chicago, New York, San Francisco, Miami.  (SEE BELOW ARTICLE AND CLICK ON A PICTURE TO VIEW LARGE PHOTOS)

University of Missouri just 20-miles away.

Lake of the Ozarks, 59-miles South of Boonville, Missouri.

Lake of the Ozarks, 59-miles South of Boonville, MO

Daughters of the American Revolution Headquarters 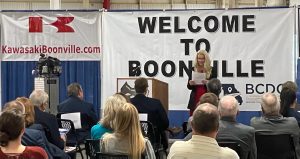 Mark Hittner is a 1975 graduate of Boonville High School, Boonville, MO,
played as Quarterback for BHS State Championship Team in 1974.
His Parents owned Hittner Furniture in downtown Boonville until sold in
1986. Also, his parents owned and operated A&W Drive-in during the 1960’s.
Mark is a 1980 graduate of Pittsburg State University in Pittsburg, KS. He
was Quarterback on the football team for four years.
Mark earned a double degree in accounting and economics at PSU.
He was employed at Phillips Petroleum in Bartlesville, OK until 1986 when he
moved to Kansas City, MO, and has resided in KC ever since.
He married Rebecca Overstreet of Boonville, MO in 1982 and they have three
sons: Jason, Grant, Lincoln.
Mark began refereeing football in 1980, refereeing the Big 8 Conference from
1984-1995, the Big 12 in 1996, then moved up to the NFL in 1997 to today.
He has refereed in three Super Bowls: SB 36, SB 38 & SB 40.

Location was at the Isle of Capri, in Boonville, Missouri, on April 13th, 2016, social hour started at 5:30 pm, dinner at 6:30 pm.
Our foundation is organized exclusively for educational purposes to provide supplemental funds for educational and scientific programs or activities for the Boonville R-1 School District, THAT ARE NOT FUNDED BY COUNTY, STATE AND FEDERAL SCHOOL FUNDS.
THANK YOU VERY MUCH!
BRUCE R. QUINLAN
President

From sea to shining sea, our top picks for the most amazing American small towns to see this year.

When it comes to places to take a vacation, it’s easy to think of America’s big cities: Chicago, New York, San Francisco, Miami.

But America is filled with wonders that are less heralded but no less magnificent, from the ancient forests of the Pacific Northwest to the moss-draped bayous of the South.

all packed into towns with a smaller population than many college campuses.

For the fourth annual version of our list, we once again worked with the geographical information company ESRI to sort the nation’s small towns

(those with a population under 20,000) according to their number of cultural attractions, historical sites, nature opportunities and food-and-drink destinations,

then researched to find the places commemorating important anniversaries, openings, renovations, recoveries and other milestones in 2015.

Think of this list not as a ranking but as a menu, with something for every taste—whether it’s country bluegrass, Florida’s white beaches or Alaska’s blue mountains.

Settled by sons of Daniel Boone, who established their salt business nearby, Boonville is home to hundreds of historic locations—from 2,000-year-old

Native American burial grounds to the 1860s Rivercene Mansion, built by a wealthy riverboat captain and now a graceful bed and breakfast.

There are also sites associated with the Sante Fe Trail, the Civil War and Jesse James, not to mention the Katy Trail—

the former Missouri-Kansas-Texas Railroad converted into the nation’s largest rails-to-trails project, which celebrates its 25th anniversary this year.

2015 also sees the 40th anniversary of the Missouri River Festival of the Arts, held August 27-29 at Thespian Hall, the oldest theatre still in use west of the Allegheny Mountains and

a former Civil War hospital. One of the nation’s most extensive collections of antique Mitchell cars and wagons

also just opened up at the Mitchell Antique Motorcar Museum, while a little further out of town, you can meet the Budweiser Clydesdales at their 300-acre breeding facility, Warm Springs Ranch.